The things I do in the middle of the night when my wife is away...
July 7th, 2015  by Blaine Garrett

With a bit of tinkering and re purposing some spare parts, I made a quicky stop motion animation painting test video. 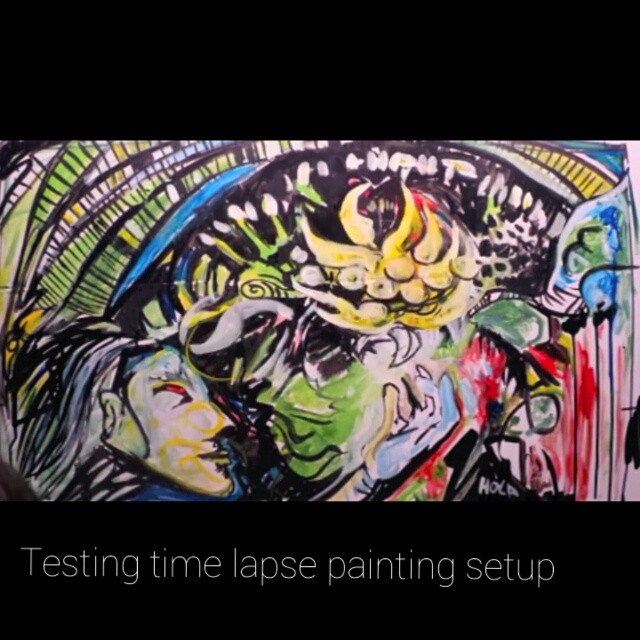 Using a boom arm mic stand, some duct tape, a GoPro handle bar bike mount I made a ceiling mounted recording setup. I then set up an easel and a box as a temporary canvas ( See a picture of the setup. ). Using the wireless feature on my Hero3+, I was able to use my phone as a viewfinder and mark off the corners of the viewable area of the widescreen video. After that, I just started painting and snapping a photo with every so often. The few seconds of video equate to an hour or so of painting. I didn't really have subject in mind, but I did know I wanted to mutate the picture a bit as I painted. The end result got a tidge weird.

I did make a few goofs - namely, I framed the shot up in Normal view mode, but the photos themselves shot in Wide View mode resulting in my having to crop the video ultimately to reduced image quality. It was also the first time using Go Pro's clunky (and discontinued) editor application to turn a series of photos into a video file. I cropped this video in IMovie, which I am more familiar with. I then had to convert that using VLC player into a format that I could post to Instagram. This all resulted in a loss of quality I am sure. I need to learn Adobe Premier as I think it will do most of this for me.

All that said, I think this was an interesting test and I hope to do some more of these in the future. Be sure to follow me on instagram to see more.