It's Official - Sabretooth for Halloween

After a little comedic back and forth yesterday at work starting with C.K.'s post about "Wolverine Being a Slut", I decided to go as Sabretooth from the Xmen. I was going to reprise the Wolverine role from last year in order to finally get my claws to retract (which didn't quite work last year). I was also toying around with the idea of going as one of the Knights of Lil John with Joe and crew. The joke yesterday was about getting some action by virtue of being Wolverine. I joked that I was trying it again this year. However, my boss Trey, suggested that I would make a better Sabretooth. Bam. So I pondered it a bit yesterday and think I might do some variation of the Origins movie Sabretooth since I don't want to go blond for it nor am I shaped like a giant muscled icecream cone in spandex. I might bust out some faux fur or perhaps do some commando style Team X costume. Eitherway, I am going to start growing my side burns again. Rocktacular. Hopefully, I don't have anything I need to look "nice" for any time soon. haha. Stay tuned. 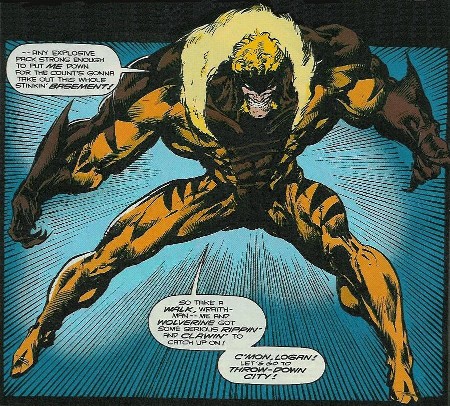